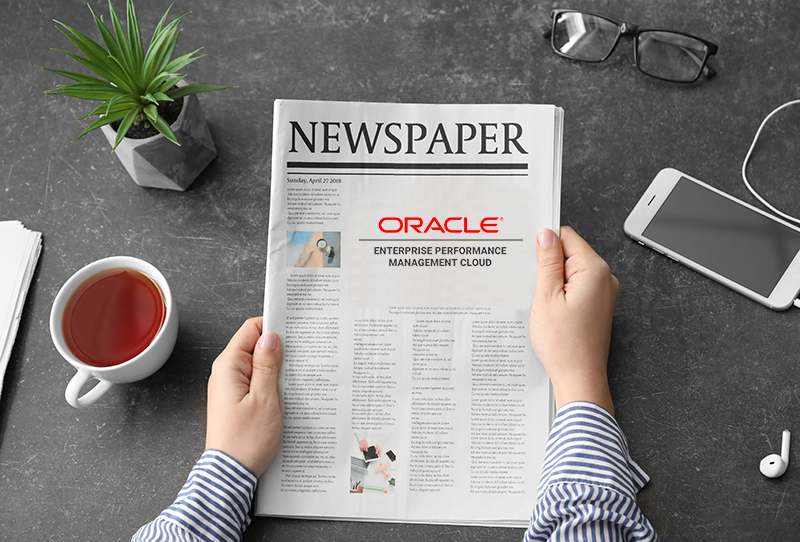 Welcome to the Olympus Consulting monthly(ish) Oracle Cloud EPM update highlights series! Each month (or so) we will provide some of the key highlights from the latest updates from Oracle. The timing for this post worked out well as there are several major updates in the February 2021 release or Oracle Cloud EPM. In case you are not already an Oracle EPM customer or you just missed the update e-mail, you can find the full list of what’s new here:

We’ll start with one of the biggest updates we’ve had in quite some time. We have all used Financial Reporting on the cloud for years, and for at least two years we’ve heard that it will eventually be going away. As of February 2021, that rumor has now taken a massive step towards reality. As of this release, all business processes will now have the Management Reporting portion of the Narrative Reporting business process baked in. I’ll say that one more time…Management Reporting from Narrative Reporting, which we have all suspected and at various times been told by Oracle would replace Financial Reporting is finally here. So what does this mean?

In the short-term, nothing earthshattering for the existing user of Financial Reporting. It won’t go away in this release, but it states in the notes that it will go away at an undefined point in the future. So long term, if you are currently using Financial Reporting, we have now reached critical mass for starting the migration to Management Reporting. It also means that they have changed the name of Management Reporting to simply be Reports. For many users of Financial Reporting, you can simply import the reports. The process will obviously take a little more time than just the import to ensure proper testing, but in general this should be a straight forward process.

For clients using any type of batch and burst options in Financial Reporting, you should start taking a look sooner rather than later. There is no import for this process and you will have to rebuild the batch and burst process as part of your migration and testing efforts. If you haven’t started using Management Reporting yet, or you simply need to understand what this transition looks like, feel free to contact us and we will gladly scope out a migration.

When PBCS first released, it started with a very basic connection type in Cloud Data Management: File. Eventually, Oracle released a direct connection to Fusion GL, which allowed for the main ledger to be retrieved into the workbench. To say the initial release was somewhat premature may be an understatement. It required a report ID and was somewhat challenging to actually automate. But it did work. Finally, Oracle released a revamped direct connection to Fusion GL which was quite excellent and essentially pulled data directly into the workbench using the Fusion GL Essbase cube. As of this release, Oracle has massively upped their game. Here is a list of the new source connections:

For products like ARCS where we routinely need access to AP and AR, this is a pretty amazing step forward. We look forward to testing this functionality out in the very near future.

FCCS has been a product in transition basically since it was released. The newest version of FCCS has taken very large steps forward, but one thing you might notice frequently during development is that an Essbase refresh is not always as quick as you would like. In my experience, it isn’t even entirely predictable. With this release, Oracle has started down the path of addressing this concern. They have introduced a set of Performance Substitution Variables that will control the behavior of an Essbase refresh. There are three new variables that can be set to true which will have different impacts on performance:

I find the DeltaDBRefresh the most interesting of the options. Some time ago, the refresh to Essbase was modified to rebuild the entire outline from the Planning Repository during every refresh. In general this helped with performance because there was no need to check each member to see if an update was required. With this refresh update, Oracle has taken a step sideways from the old approach and the new approach and opted to only update changes from the repository itself. We hope to see this greatly improve the consistency of refreshes and overall performance.

Looking Forward to the Next Update

There are a metric ton of updates across the Oracle Cloud EPM platform in the February update. Until the next update, we’ll be on the lookout for cool new features!